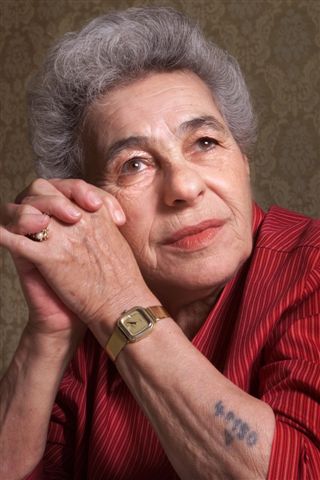 Anna Heilman was one of the last living survivors of the plot to blow up Crematorium IV at Auschwitz-Birkenau.  The plot was part of the plans for the October 1944 Sonderkommando Uprising.

Anna was born on December 1, 1928 in Warsaw, Poland into a middle-class assimilated Jewish family .  Her parents, Jacob and Rebecca, were both deaf (all three of their children had normal hearing). Jacob was born in Warsaw in 1887.  He owned a factory (Snycerpol) in Warsaw that employed deaf workers to make wooden handicrafts.  He traveled extensively on business, including to the 1936 Paris World Exposition to exhibit the Snycerpol factory's products.  The handicrafts from his factory were also shown at the New York World's Fair in 1939.  Rebecca was born in 1898 in Pruzany, Poland.  She came from the wealthy Jaglom family.

Anna had two older sisters.  Sabina, the eldest escaped the Holocaust with her former tutor and future husband, Mietek.  They survived the war by fleeing to the Soviet Union and subsequently settled in Stockholm, Sweden.  Sabina died in 1995.  Anna's best friend was her older sister Esther (nickname: Estusia).

Anna and her two sisters lived with their parents in an apartment building at 38 Mila Street, in an area that became part of the Warsaw Ghetto after the Nazi invasion of Poland.  Their apartment building was down the street from 18 Mila Street, headquarters of the ZOB (Zydowska Organizacja Bjojowa - Jewish Fighting Organization), led by Mordecai Anielewicz.  The family were among the last deportees from the Warsaw Ghetto when they were crammed in a sealed boxcar and transported to Maidanek in May 1943. There were 170 people in the boxcar.  There was no food or water.  Only 120 of the 170 were alive after the two day trip to the Maidanek concentration camp.  Her parents were murdered upon arrival at Maidanek.  Estusia and Anna were sent from Maidanek to Auschwitz in September 1943.

Auschwitz-Birkenau was both a vast death camp and a huge industrial complex. Beginning in September 1943, Mrs. Heilman and her older sister Estusia were "employed" as slave laborers in the Union Munitions factory at Auschwitz- Birkenau.

The Sonderkommando at Auschwitz were male slaves who assisted the Nazis - primarily in helping to dispose of the bodies of the murdered.  So as to leave no witnesses, the SS periodically executed the entire complement of the Sonderkommando, and replaced them with "fresh" slaves from the transports.

Though regularly searched, and subject to instant execution if caught, Estusia, Anna, and a small number of other women played key roles in smuggling gunpowder for explosives from the Union Munitions factory to the men of the Sonderkommando.  The Sonderkommando made 'grenades' out of shoe polish cans that they filled with gunpowder that the women smuggled out of the munitions plant.  The conspirators figured that they would die anyway, but that participating in the uprising would give their deaths some meaning.

After the Uprising, the SS traced the gunpowder back to the Union factory.  Anna' s sister Estusia and three other young women, Ala Gertner, Roza Robota and Regina Safirztajn were betrayed. The SS tortured the girls for months to give up the names of their fellow conspirators.  They never gave up Anna's name, only the names of members of the Sonderkommando, who were already dead.  The four girls were hanged on January 5, 1945, just under two weeks before the advancing Soviet Red Army reached Auschwitz.  The entire women's camp was forced to watch the executions.  The women died as Jewish resistance fighters.  The four young women were murdered as were millions of others, but their act of defiance and courage forced the Nazis to recognize them as individuals.  They were executed as resistance fighters under direct orders from Berlin.

The execution occurred just before Auschwitz was brutally evacuated on January 18, 1945 as the Soviet Army continued its advance towards Germany.

Anna was sent on a forced march to Ravensbrück where she stayed until February, 1945, and then at Neustadt-Glewe, where she remained until being liberated by the Soviet Red Army on May 2, 1945.  After a brief stay in Belgium, she emigrated in May 1946 to what was then Palestine under the British Mandate.

Anna married Joshua Heilman on March 7, 1947.  Joshua Heilman had left Poland to pursue his university studies in British Mandate Palestine one week before the outbreak of World War II.  His younger sister Rose was sent Auschwitz.  She survived. The rest of their family was murdered.

Anna obtained a degree in social work in Israel.  Anna and Joshua had two daughters.  Joshua went to the United States as a Hebrew teacher and brought the rest of the family to Boston in 1958.  The family emigrated to Ottawa, Canada in 1960 where Joshua found work as a Hebrew school principal.  Anna worked with The Children's Aid Society in Ottawa as a bilingual (English-French) social worker until she retired as supervisor of the English-French unit in 1990.  Joshua Heilman died in October 2005.

The United States Holocaust Memorial Museum (USHMM) has an extensive interview with Anna.  Below is a link to Anna's Anna's Oral History Testimony at the USHMM:

The Holocaust and United Nations Outreach Programme, in partnership with the USC Shoah Foundation Institute for Visual History and Education and Yad Vashem, The Holocaust Martyrs' and Heroes' Remembrance Authority produced a DVD "Women and the Holocaust: Courage and Compassion" with 6 testimonies and study guide for high school students to better understand the ways in which the Holocaust affected woman The Study guide is available at www.un.org.  Below is a link to Anna Heilman's video testimony:

Link to New York Times Review of "The Light of Days: The Untold Story of Resistance Fighters in Hitler's Ghettos"

Anna's diary and testimony are also featured in the 2022 documentary "Sabotage" by DocFilms, released on April 27, 2022, Holocaust Remembrance Day (Yom Hashoah).  Sabotage focuses on the four young women publicly executed as saboteurs at Auschwitz in January 1945 for their role in the October 1944 Sonderkommando Uprising.

Anna died on Holocaust Remembrance Day (Yom HaShoah), the 27th day of Nisan on the Hebrew calendar, May 1, 2011 in the Gregorian calendar. The 27th of Nisan marks the anniversary of the Warsaw Ghetto Uprising.  Anna was buried on May 2, 2011, exactly 66 years after her liberation in 1945.

Link to Anna Heilman's obituary in the Globe and Mail

Link to "Heroines of Auschwitz" in the National Post 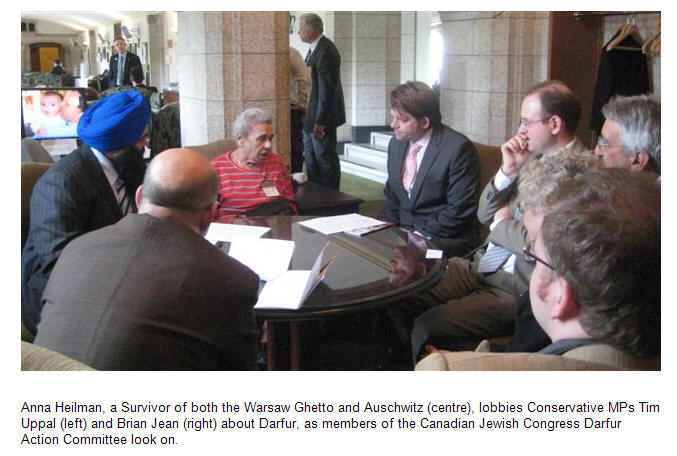